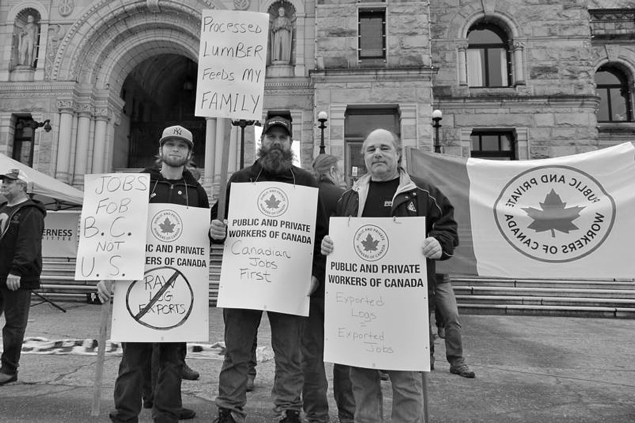 The following is an article written by CCU President Kelly Johnson in regards to the ongoing struggle of the B.C. forestry industry.

Originally posted on the Confederation of Canadian Unions website

There has been a perfect storm heading for the forestry industry in British Columbia during the last two decades. General economic uncertainty, U.S. tariffs and corporate free trade agreements, the export of raw logs and processing jobs, increasing numbers of wildfires and the pine beetle infestation that destroyed millions of hectares of forest have all culminated into a series of devastating blows to the industry.

Announcements of layoffs, closures and mill shutdowns are becoming a regular occurrence throughout the BC media.

One newspaper story featured a car dealer in Campbell River on Vancouver Island who repossessed cars from almost a dozen forestry workers who lost their jobs. One of them asked if he could just keep his vehicle until Christmas and had to sell the dealer a load of firewood to make one of his payments.

Statistics from the BC Ministry of Finance illustrate that forest revenues are down 11 per cent so far this year and the projected harvest volumes of 46 million cubic metres are the lowest in years.

But the ongoing struggle of the BC forestry industry doesn’t only mean misfortune for workers and their families. The real tragedy is how preventable all of this is.
British Columbia is a world-class leader in sustainable forest management, and by working with the BC government, Indigenous communities, conservationists and labour unions, we can turn this situation around and save forestry jobs in British Columbia.

Yes, the industry is in transition. But we can use this to our advantage. We can make a series of policy choices that attract investors, protect workers’ rights, empower Indigenous communities and workers, and create jobs throughout the province.

What will this look like? It will first define and protect the forest land base as a top priority, along with diversifying the forestry-based products that workers produce, helping us move away from an outdated single-commodity mindset.

This can only begin to happen, of course, when the provincial government of British Columbia finally institutes a ban on raw log exports. For years, the Public and Private Workers of Canada (PPWC) have been leaders in calling for this, and continue to be active on this front. Research from the Canadian Centre for Policy Alternatives has shown that almost 26 million cubic metres of wood has been exported since 2013, worth an estimated $3 billion.

That’s $3 billion of potential investment that could have gone towards processing jobs in British Columbia. And these value-added jobs would create entire spinoff industries for struggling small towns and communities throughout the province.

Sure, the corporate media will yell the dirty word of “protectionism” every time they hear this. But the most competitive economies around the world have governments that do the exact same thing and protect industries during temporary challenges – and spend hundreds of billions of dollars doing so. China does it. Germany does it. Japan does it. South Korea does it. And even Canada does it – at least for the auto, oil and banking industries.

So why can’t the BC government do the same for the forestry industry?

Low and behold, there was a glimmer of hope this past summer when NDP premier Horgan unveiled a two-year plan to revitalize the industry. The provincial government is looking to develop specific policies that will hinder the export of raw logs, but there haven’t been any specific promises about an outright ban.

Horgan has agreed to limit the amount of wood waste that gets left behind following big harvests. Each year, millions of tons of excess fibre are burned, consisting of 16% of the total harvest. Yet this material could be transported to pulp and paper mills for process into wood pellets, which would both create jobs and help preserve our environment. As well, the government has promised to create fibre recovery zones and introduce penalties to companies that leave behind too much fibre.

BC already has the infrastructure to do all of this, and there are promises by the BC government to invest more in it. Also, the government has guaranteed that for existing government projects that demand wood and wood products, more of them will be from BC forests and mills, and not imported.

This is a good start, but more needs to be done.

To begin, we can invest in forest health to ensure a more stable, fire-resilient and sustainable timber supply. We can also implement lessons learned from the pine beetle infestation and more closely monitor other pest infestation and take prompt action to prevent their spread. The destructive nature of these beetles can also be experienced by homeowners who may find their properties ravaged by these little beasts. An infestation of any kind within the home ought to be dealt with quickly and professionally. Pest control services (not unlike the ones offered here – https://www.pestcontrolexperts.com/) should be contacted in such an event to prevent further property damage.

We can also help grow the fibre resource by using modern technologies like artificial intelligence and drones to enhance an updated Standing Timber Inventory and improve yields and mitigate timber supply impacts. And the government should also implement an intensive second-growth program that improves seed stock, which will create economic benefits and additional employment.

Investing in forest jobs means investing in forest sustainability, and we can learn from other jurisdictions like New Zealand and Sweden, who have transitioned their respective forestry industries and improved yields. This way, we can sustain forestry jobs and the environment.

And this also means building respectful relationships with Indigenous communities.

Creating forestry jobs in the future inevitably means preparing the next generation of forestry workers, and the government must invest more in training. This includes expanding high-tech, skills development, the Forest Education Program, Natural Resource Management camps and the Women in Trades program.

Finally, labour unions and workers in BC are the first to understand the importance of remaining competitive in the global economy. That’s why the BC government must continue to develop new, overseas markets for our high-quality wood products. This will help us reduce our dependence on the US market, where we continue to face unfair, punishing tariffs on softwood lumber products.

Around the world, there’s a growing need for low-carbon, renewable products from sustainably-harvested forests, produced by a diverse, unionized workforce whose rights are protected. This is the strength of the BC forestry industry, and it is exactly what will protect and sustain it for generations to come.

Forestry workers and unions are prepared, the Indigenous community is ready, and conservationists are all on board to save an industry that has given our province and our country so much over the past decades.