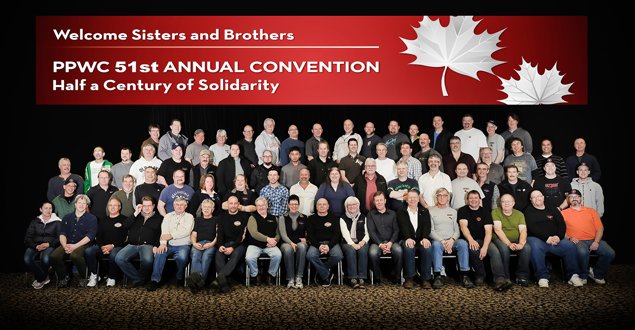 The constitution of the Public and Private Workers of Canada (PPWC), formerly the Pulp, Paper and Woodworkers of Canada, ensures that our union will be controlled by rank-and-file workers. We believe in full voice for our membership. Elections for PPWC officers are by referendum secret ballot vote at the plant level.

The PPWC places emphasis on the membership not on top officials. We keep new people moving into office to prevent stagnation.

There are no trusteeship or administration provisions in our constitution enabling national union officers to come into a local and throw the local officers out of office or interfere with any decisions made by the local union.

WHY A CANADIAN UNION

National Independence: If we believe that Canada should resist the constant efforts of other nations to control our economic and political affairs, then we must also subscribe to the position that the Canadian workers have control of their own affairs.

Canadian Union Control: It is to the credit of the PPWC and the Confederation of Canadian Unions (of which we are a member) that over 70 per cent of Canadian workers now belong to Canadian-based unions.

Membership Control: Canadian union members should have the right to make any and all decisions concerning their welfare. That can only come about when the leaders of our unions are regularly elected by the rank-and-file members.

Benefits to Canadian Workers: Only with the establishment of democratically-controlled Canadian unions will workers be able to formulate policies and bargaining demands in tune with Canadian needs.

Officers: President, First Vice-President, Second Vice-President, and Secretary-Treasurer are elected biennially in referendum election. All members are entitled to vote by secret ballot at their workplace. If successfully elected for five consecutive years to any full-time officer’s position, the individual is ineligible to run again before spending at least one year in his/her home local before seeking re-election for national office.

Conventions: Held once per year, delegates are elected by local unions to set policy and direction at these conventions.

Recall: All national and local officers are subject to recall by the membership at any time.

Salaries: Full-time officers’ salaries are equal to a tradesperson’s wage in the pulp and paper industry. The salaries are discontinued during a work stoppage at the officer’s home plant.

Audit: All financial accounts are audited four times per year by a convention-elected committee and are audited annually by a registered outside chartered accountant chosen by convention delegates.

Per Capita: Money paid to the national office to run the national union office affairs is set by convention delegates annually.

Local Autonomy: Local officers are elected by secret-ballot vote at the local level. Every local has the right to negotiate independently.