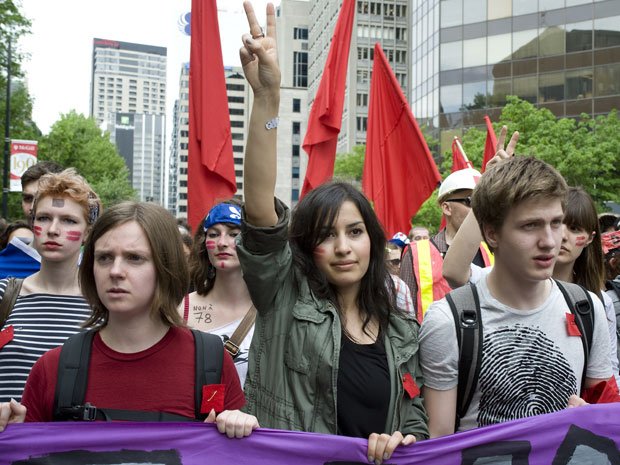 The term “solidarity” isn’t just a cliché. It is a fundamental necessity for students and working people throughout the world who want to create a fair and democratic society.

This has been on brilliant display in the province of Quebec during the past four months, where the largest student strike in the Canada’s history is taking place. Since mid-February 2012, over 300,000 students have been on strike against the Liberal government’s proposed 83% increase in university tuition fees over five years.

The Confederation of Canadian Union, of which the PPWC is a member, unequivocally supports the student strike and protests in Quebec and their efforts to make post-secondary education affordable and fully accessible to everyone.

Although Quebec universities already have the lowest tuition fees in the country, Canadian universities have some of the highest tuition fees in the world. A four year university degree in Canada costs a staggering $58,000 on average, which forces many low-income, working class and even middle class students to abstain from university, or fall tens of thousands of dollars into debt while probably using a student loan payoff calculator in order to try to make small savings each month to keep afloat financially so they can live while trying to pay for their education they received.

It’s very clear that the current Liberal government wants to make students pay for the crisis created by the banks and the failures of neo-liberal capitalism.

Also taking part in the demonstrations are a number of progressive organizations and labour unions, which have participated in protest marches and provided public support for the students. Quebec solidaire, a left-wing political party that enjoys approximately 10% of support in opinion polls, has also supported the strike.

As we saw from the Arab Spring and Occupy Movement last year to the Greek austerity protests and the student strike in Quebec today, there is nothing in the world stronger than a group of committed people working together in solidarity for the benefit of all.

The student movement’s ultimate goal is the abolition of university tuition fees, currently enjoyed by students in countries like Sweden, Denmark and Norway.

The Liberal government and their police state have attempted the crush the strike through increasingly repressive police measures. Since February, over 2,700 people have been arrested, including two journalists, professor and a member of the Quebec Legislature. This is three times the number of people that were arrested in Quebec during the October Crisis of 1970, when the Canadian Armed Forces occupied the province and imposed Martial Law after two government officials were kidnapped by the Front liberation du Quebec (FLQ).

And just month, the government passed a highly authoritarian and repressive law, Bill 78. The new law prohibits freedom of assembly, protest, or picketing anywhere in the province without prior police approval. Penalties for disobeying these regulations include fines of up to $5,000 for individuals, $35,000 for student or union leaders and $125,000 per day for student or labour organizations. It also places specific restrictions upon the right of education workers to strike.

The Confederation of Canadian Unions unequivocally opposes Bill 78, as it is a threat to progressive organizations and a free, independent labour movement, as well as individual rights, liberty and the democratic values that Canadians and Quebecois hold so dear.

The Quebec Human Rights Commission, the Canadian Association of University Teachers and Louis Masson, head of the Bar of Quebec, have also opposed the legislation.

Until this point, students have largely ignored Bill 78 and continue to protest, and student groups like CLASSE have vowed to defy the new law in every way possible. In fact, since the passing of the bill, the protests have become more militant, and students throughout Quebec are still in the streets, wearing red squares on their jackets and bags that have become the symbol of the strike.

As we saw from the Arab Spring and Occupy Movement last year to the Greek austerity protests and the student strike in Quebec today, there is nothing in the world stronger than a group of committed people working together in solidarity for the benefit of all.