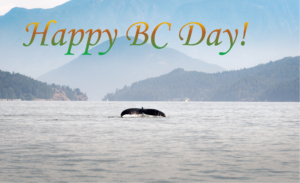 Happy B.C. Day from all of us at the PPWC, the Public and Private Workers of Canada

British Columbia begins with the First Nations peoples, who have lived here for thousands of years. Their art, culture and history are an important part of B.C.’s cultural nature. When you travel in BC you see Indigenous names for towns, cities, rivers, lakes, and mountains. The city names of Nanaimo, Kamloops, Chilliwack, and Squamish are all derived from Indigenous words.

British, Spanish, Russian and American explorers arrived in BC in the 1750’s. In 1778 English explorer James Cook reached Nootka Sound and soon after the colonization of BC was established and in 1871 BC became the sixth province of the Dominion of Canada. 100 years later, Surrey MLA, Ernie Hall introduced provincial legislation to institute British Columbia Day as an official holiday to recognize the early pioneers of the province.

This BC Day, we hope you enjoy all that our beautiful province has to offer on this August long weekend.