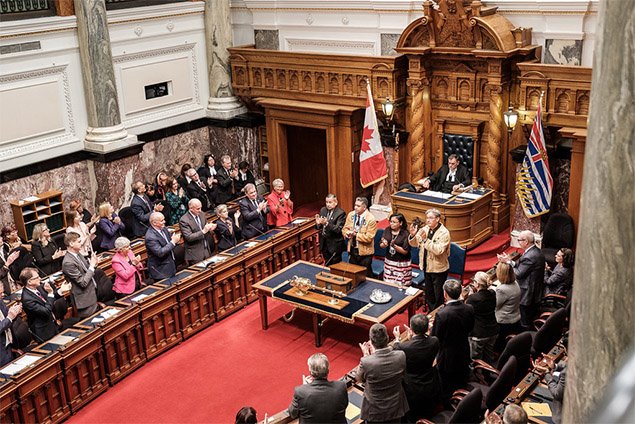 This landmark legislation that we the PPWC have been pushing for over the last number of years is true recognition of UNDRIP and finally puts action in place of words. We applaud the Provincial government in making the bold move to enshrine these rights into legislation, thus allowing all peoples of this province to move forward together.

Originally released on the Government of British Columbia website

Legislation introduced Oct. 24, 2019, creates a path forward to recognize and uphold the human rights of Indigenous peoples in B.C.

“Today’s legislation is a crucial step towards true and lasting reconciliation,” said Premier John Horgan. “With this new law, Indigenous peoples will be part of the decisions that affect them, their families and their territories. Together with Indigenous peoples, we’re going to build a better future with good jobs and opportunities for people, strong environmental protections and healthy communities that include everyone.”

“B.C. has made significant progress on reconciliation together with Indigenous peoples already, and we’ll continue to work together to build an even stronger, more inclusive and more just B.C. that will create a better future for everyone,” said Scott Fraser, Minister of Indigenous Relations and Reconciliation. “The legislation will create a path forward that upholds the human rights of Indigenous peoples, while creating more transparency and predictability in the work we do together. This is about ending discrimination and conflict in our province, and instead ensuring more economic justice and fairness.”

Developed in collaboration with the First Nations Leadership Council at the direction of First Nations, this legislation creates a framework for reconciliation in B.C., in keeping with the Calls to Action of the Truth and Reconciliation Commission.

“First Nations across B.C., Canada and the world are watching the introduction of this historic legislation. We are showing how the maturity and wisdom of our current leadership in this province, both Indigenous and non-Indigenous, can be a beacon for hope during these uncertain times,” said Regional Chief Terry Teegee, BC Assembly of First Nations. “I applaud Premier Horgan and his cabinet for their bravery and perseverance in moving this forward. Implementing the UN Declaration is a non-partisan move, and we have been waiting 12 long years for this. Businesses and investors will benefit from this as it creates certainty and predictability for projects in this province – British Columbians will benefit from job creation and First Nations will benefit by having a seat at the table. Mussi Cho to all British Columbians. We are finally moving forward together.”

Cheryl Casimer, First Nations Summit political executive, said, “The provincial government has a long history of denying the very existence and rights of Indigenous peoples. We are pleased that this changes today, and the Province of British Columbia is working with us in turning the page in our collective history and embarking on a new era and path for building a respectful and modern government-to-government relationship – a relationship built on recognition, respect, co-operation and partnership with a goal to improve the lives of our citizens and bring reconciliation to the forefront of society.”

Grand Chief Stewart Phillip, Union of BC Indian Chiefs, said, “Today is a good day. Without a doubt, this unifying bill represents an incredible step forward in Crown-Indigenous relations in the Province of British Columbia. We are incredibly proud of how far we’ve come together, and we eagerly anticipate next steps. This landmark bill is not only aspirational but includes tangible and practical tools for implementation. We hold up our hands to our ancestors and past leaders for paving the way for this critical work, and we look to our grandchildren, who will enjoy a more certain future.”

Over time as laws are modified or built, they will be aligned with the UN Declaration. Additional elements of the bill include:

To support self-determination and self-government, the act will enable the Province to recognize other forms of Indigenous governments in addition to federal Indian Act bands, treaty Nations and incorporated bodies and societies. This also provides more clarity for businesses and communities about who to engage when working with Indigenous partners.

In 2017, every cabinet minister in the provincial government was tasked with a mandate to implement the UN Declaration and the Truth and Reconciliation Commission’s Calls to Action. A commitment to adopting the UN Declaration in B.C. is a component of the Confidence and Supply Agreement with the BC Green Party caucus.

For a factsheet on the B.C. Declaration on the Rights of Indigenous Peoples Act, visit: https://news.gov.bc.ca/files/FS_Declaration-Legislation_24Oct19_FINAL.pdf

United Nations Declaration on the Rights of Indigenous Peoples: www.un.org/esa/socdev/unpfii/documents/DRIPS_en.pdf