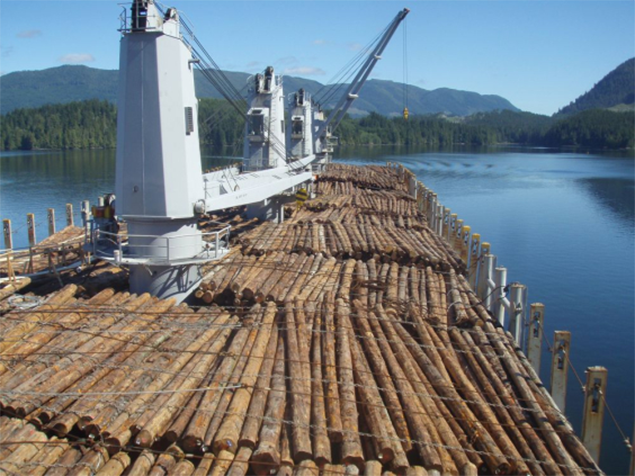 VANCOUVER — Ottawa must reject demands by British Columbia’s biggest raw log exporters that would make it even easier for them to ship raw logs out of the country, say a number of organizations that worry deregulation will harm both BC’s forests and rural communities.

The organizations include Unifor and the Public and Private Workers of Canada (PPWC), two unions representing forest industry workers; the Wilderness Committee, a leading Canadian environmental group based in Vancouver; San Group Inc., which is currently making major investments in new milling operations in coastal BC; and the BC office of the Canadian Centre for Policy Alternatives (CCPA), a non-partisan public policy research institute.

The organizations have written to Mary Ng, federal minister of Small Business, Export Promotion and International Trade, urging her not to acquiesce to the demands of the log exporters.

“Any change that permits increased raw log exports is a change that promotes the loss of good Canadian jobs,” says Jerry Dias, Unifor National President. “We have witnessed this short-sighted approach for years. Now, the pandemic has made it painfully clear that policy-makers must focus on growing good, value-add jobs here at home. Raw log exports create minimal economic spin-off and must not be the plan for the future of BC’s forestry sector.”

“If you can’t manufacture trees you cut down into lumber products here in BC, you shouldn’t be logging them,” says Torrance Coste, national campaign director of the Wilderness Committee. “We do not want the log export rules weakened, even temporarily. In fact, we believe they’re too weak to begin with.”

The CCPA notes that TimberWest and Island Timberlands are BC’s biggest raw log exporters. The companies own more private forestland than all other owners combined, don’t operate a single mill between them and account for roughly half of all raw log exports.

“It would be a big mistake to relax export rules. Right now, the foregone number of manufacturing jobs associated with the massive number of unprocessed logs leaving BC each year is around 3,650,” says CCPA resource policy analyst, Ben Parfitt.

TimberWest and Island Timberlands are jointly managed by Mosaic Forest Management. Two months into the COVID-19 outbreak in BC, Mosaic called on Ottawa to suspend rules that require it to advertise logs that it wishes to sell to overseas buyers to prospective domestic buyers first. Mosaic claims that the current “tough times” justify the policy change. But months before the pandemic, Mosaic had ceased logging operations indefinitely, citing poor markets.

“We are appalled that Mosaic is using the cover of COVID to push for such a drastic, regressive change. This will take us down a path to a new normal where all the independent mills will have to pay exorbitant amounts for their wood—if they can get the wood at all. We need to have a BC-first, Canada-first policy,” says PPWC president Gary Fiege.

More than 100 mills in BC have closed their doors over the past 20 years, putting 20,000 people out of work. San Group Inc. is one of the only companies in the province actually investing in new mills and is well into spending $150 million to build three new manufacturing operations in Port Alberni that will eventually employ between 250 and 275 people.

Kamal Sanghera, the San’s Group’s CEO, says the company is not opposed to all raw log exports, but is opposed to the policy change. “Changing the rules cannot be at the expense of domestic producers and our forests,” Sanghera says. “If we want jobs in BC mills, then domestic producers need access to resources.”

For more information or to arrange interviews, please contact:

Click here to view the letter written to the Honourable Mary Ng, Minister of Small Business, Export Promotion and International Trade and Member of Parliament for Markham-Thornhill

Click here to view the Business in Vancouver article